One person is dead and another injured, after a vehicle driven by an alleged DUI motorist veered off the highway and crashed into a tree in Sacramento, California. According to accident reports obtained from the California Highway Patrol, the tragic occurrence played out on Saturday, April 18.

Confirming the incident, officers said that at about 10:20 am, a traffic collision was reported on Highway 160.

Investigators determined that the vehicle involved, driven by Mark Grosvenor, 34, was traveling along the highway, with two passengers on board.

Upon approaching Canterbury Road, the car drifted sideways and collided head-on with a tree located off the road, leaving the vehicle severely dented. The two passengers in the car, who suffered major injuries, remained pinned in the vehicle after the tragic wreck, while the driver emerged unhurt.

First responders successfully rescued the trapped victims and transported them to a health facility within the vicinity for treatment.

One of the accident victims, who was a female, succumbed to her injuries at the hospital shortly after their arrival, while the other, identified as Anthony Jones, 26, has remained hospitalized. The nature of Jones’ injury, as well as his health condition, were not disclosed in the accident reports.

Authorities withheld the name of the fatal victim pending notification of her next of kin.

CHP officers determined that the motorist was driving under the influence at the time of the crash. Grosvenor now faces DUI-related charges.

Next David Vetkov Killed In Motorcycle Crash Near Nooksack 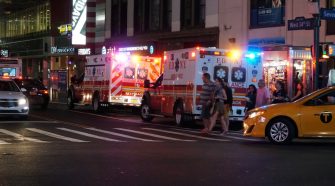