A police chase in Van Nuys, in the Los Angeles area of California, on the night of Thursday, February 27th, left four injured, and one person, Vikram Samra, unscathed. The chase ended with a two-vehicle collision.

According to the authorities, a group of teenagers had stolen a car in Pacoima, at about 10:30 p.m., and took it for a ride. Police tracked them down, as they sped away onto 118 Freeway before entering the south lane of 405 Freeway in Granada Hills.

A little while after entering the Freeway, the stolen car hit the vehicle driven by Samra from behind. The rear-ended crash happened on Victory Boulevard and sent the other vehicle spinning.

The car spun until it stopped at the side of the road while the vehicle the teenagers were in slammed into a traffic pole. The impact left three of the teens, who got identified as a male and two females with severe injuries.

Samra had a male passenger in his car who also sustained significant injuries, but his name has not been released. The four injured people were transported to the hospital where they are receiving treatment.

Two of the teenagers, who have little or no injuries, tried to flee the scene but got apprehended by the police. The accident led to the closure of the carpool, but lanes 1 and 2 on the highway reopened at 11:30 p.m.

Lanes 3 and 4 remain closed, and the investigation into the crash is still ongoing. The police have not charged the teenagers with an offense yet, and Samra, who described the crash as the worst accident of his life, is grateful to be alive. 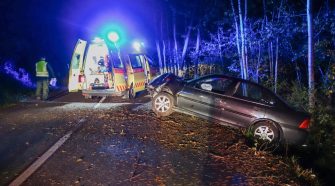