The Riverside County District Attorney’s Office dropped two charges against the defendant after he admitted the manslaughter charge, a count of resisting arrest, and a sentence enhancing allegation for fleeing the scene of a collision.

Bayard made the admission during a status hearing at Southwest Justice Center in Murrieta. The accident report released early this year showed that around 6:15 a.m. on January 3rd, the man drove a 2011 Nissan Versa on the northbound Highway 371 over the speed limit.

As he approached Aguanga, the vehicle rear-ended a Toyota pickup. The impact caused the Nissan to spin out of control, according to the California Highway Patrol. It turned into the southbound lanes, north of Wilson Valley Road.

The vehicle ended up in the path of a 2001 Mercedes-Benz, driven by Joan Terlisner. The collision caused the Mercedes to travel into the northbound lane before rolling over onto the shoulder east of the roadway edge.

Officer Mike Lassig said the Nissan overturned on the roadway’s westbound shoulder. Bayard extricated himself from the wrecked car and ran from the scene on foot. Riverside County Fire Department paramedics arrived a few minutes later and pronounced

Tersliner dead at the scene. The two occupants of the pickup did not sustain injuries. The CHP immediately identified the suspect as the hit-and-run driver but could not arrest him for four weeks.

Officers later took the man into custody at Desert Hot Springs. Court records showed that he had prior convictions for auto theft, evading arrest, and felony vandalism. 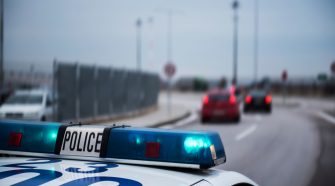