The motorcycle rider killed in an auto-motorcycle collision in Newark, California, has been identified as Michael D. Thomas, a 40-year-old Palo Alto resident. The Alameda County Coroner’s Office made the identification on Monday, September 14th.

Facts from the accident report released by the California Highway Patrol placed the time of the occurrence at about 2:20 a.m. on Sunday, September 13th. It happened on Highway 84. The investigators said that Thomas rode alongside another person.

The two traveled eastbound when a BMW sedan struck them from behind for unknown reasons. The impact killed the victim at the scene, while his companion suffered injuries. The CHP said that the BMW driver fled the crash site without stopping to render help.

Officers later located him a few miles from the collision site and took him into custody on DUI suspicion. The report stated that the investigators did not immediately determine if Thomas was under the influence of alcohol, drugs, or both.

The accident led to the closure of the two left lanes of the eastbound I-84 at the Thornton Avenue off-ramp. The investigation into the occurrence remains active.

Auto-motorcycle collisions are not uncommon, and when they happen, the driver of the vehicle mostly goes unscathed. On the other hand, the motorcyclist can either suffer minor, severe, or fatal injuries and in most cases, it is the latter.

To this end, law enforcement and traffic agencies advise motorcycle riders to wear a helmet compliant with the US-DOT guidelines. It should have a face and eye shield, in-let and out-let for air, and matched with safety apparel.

Next Kenneth Helton Survives Traffic Collision on Interstate 64 with Injuries 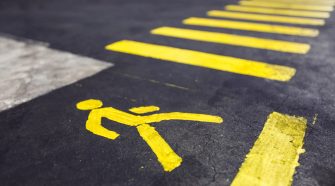