On Sunday Oct 16, Osmundo Basilio, 62, was pronounced dead at Kaiser Foundation Hospital in Fontana. He had been involved in a collision with a tow truck in Ontario the day prior, and died as a result of injuries sustained in the crash, according to the San Bernardino County Sheriff Coroner’s Division.

At 11:56 a.m. on Saturday Oct 15, Mr Basilio had been driving a Chevy Tahoe south on Etiwanda Avenue, just north of Airport Drive in Ontario, when a tow truck carrying multiple cars struck him from behind while he was stopped at a stop light. He had been running errands that morning and was on his way home at the time of the accident.

Mr Basilio was a beloved father and will be greatly missed by his family. They have set up a GoFundMe page to help cover the costs surrounding his funeral. On the page the family states that Mr Basilio was ‘was always a hard working man who put his family first, despite his limited mobility from a prior accident in 2011.’ His family is grateful to all their loved ones who have given comfort in their time of need.

The Ontario Police Department is investigating the collision.

Next Chicago Man Saves Woman and Baby Trapped in Wreckage 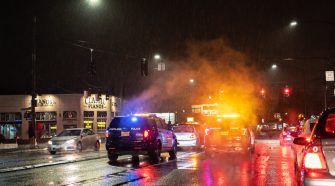