— A California man has been arrested on felony charges after an investigation into a video showing him speeding away from a crash scene with a motorcycle lodged in his vehicle’s bumper, authorities said.

Twenty-five-year-old George Valentin was arrested Saturday on a charge of hit-and-run, the California Highway Patrol reported this week. Authorities said he struck motorcyclist Chain Arunritthirot with his vehicle Friday evening on an interstate in Corona and fled the scene.

It was unclear Tuesday whether Valentin had retained the services of a car injury attorney.

Authorities said Valentin was driving a minivan on Interstate 91 in Corona at about 7 p.m. Friday when he struck the rear of Arunritthirot’s motorcycle. Arunritthirot later told local media outlets he was thrown from the motorcycle during the wreck.

Valentine allegedly kept driving, Arunritthirot’s motorcycle still lodged in his vehicle’s bumper. Authorities said he kept driving until he crashed into a fence, at which point he fled the scene on foot.

Arunritthirot said he suffered minor injuries during the incident, according to local media reports.

Passersby recorded video of the incident. Authorities arrested Valentin on Saturday on a charge of felony hit and run.

The incident remains under investigation by the California Highway Patrol. It is unclear whether additional charges or citations are expected, though investigators said they do not believe the use of drugs or alcohol contributed to the wreck.

Online court records did not list any upcoming court dates, nor did they include the name of his car injury attorney.

Next Justin Lynn Sturrock Dies in T-Bone Collision in Vidor 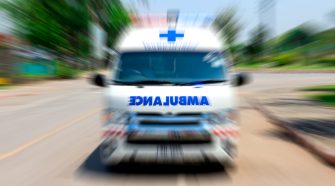