The Merced County Coroner’s Office identified the female driver killed in a two-vehicle collision near Dos Palos, California. In updates to the car accident report on Monday, October 5th, the coroner named Jami McGee, 37, as the fatal victim.

On Tuesday, September 29th, the Dos Palos resident died from the injuries sustained in the crash near Carmella Avenue. According to the California Highway Patrol, officers determined that the victim drove a 2005 Chrysler.

The preliminary investigation uncovered McGee headed eastbound on Carmella, east of Palm Avenue, before stopping. Simultaneously, a 1998 Jeep driven by Carlton Tolbert, 39, of Dos Palos, traveled on the same lane behind the victim.

The CHP said that when the Chrysler stopped, the Jeep driver moved over the broken line separating the eastbound and westbound lanes in an attempt to pass the victim’s vehicle. As Tolbert approached, McGee made a left turn in front of his car, causing the latter to strike her vehicle’s left side.

The collision force caused the woman’s vehicle to strike a parked car, pushing it into a parked trailer. The investigators said that the victim’s car then struck a tree. They stated that neither drugs or alcohol played a role in the occurrence.

Motor vehicle accidents happen for otherwise avoidable reasons, and one of them is an illegal lane change. Ordinarily, drivers must give adequate space for passing when on the road, and those who wish to switch lanes must ensure that there are no oncoming vehicles. 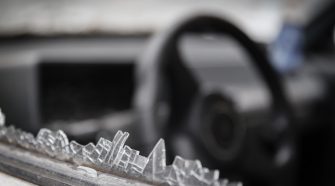