A man is dead in the Fontana area of California after he was fatally struck by a truck while riding his motorcycle along Laurel Avenue earlier this week. The incident which took place on Tuesday, April 21, may require the intervention of a motorcycle accident attorney.

Officers were dispatched to the site of the crash at about 7:56 pm, following reports of a traffic collision involving a motorcycle and a pickup truck along a roadway in Fontana.

Preliminary investigations revealed that the motorcyclist was traveling on Laurel Avenue when he got hit by a black pickup truck plying the same route.

The exact circumstances surrounding the fatal crash was not immediately established. However, reports by the Fontana Police Department confirmed that the 34-year-old cyclist was pronounced deceased at the scene upon arrival of emergency responders.

Authorities have since disclosed the fatal victim’s identity as David Lamb, 34. The medical condition and identity of the motorist who struck Lamb was not disclosed in the reports.

Officers declined to confirm whether a possible impairment by drugs or alcohol might have contributed to the tragic two-vehicle wreck. No other information was released regarding the accident.

Investigators would try to establish the events that led to the accident, as well as factors that may have played a role in the collision. 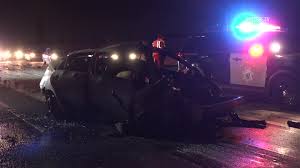