The California Highway Patrol and the San Bernardino County Fire Department were called to the scene of an accident on Friday, February 7. The accident occurred at around 5:06 p.m. at the intersection of Cherry Avenue and Whittram Avenue.

A Burrtec Waste driver, 34-year-old Pedro Pelayo of Fontana, was involved in a collision with a white Chevy Silverado, driven by a 48-year-old Fontana man whose name was not disclosed.

It took firefighters around 20 minutes to remove Pelayo from the garbage truck. Another team of firefighters had to work on containing a natural gas leak that had occurred due to the accident and the damage to the truck. The Burrtec truck is powered by natural gas.

Both men were transported to Arrowhead Regional Medical Center for the treatment of their injuries. Pelayo was pronounced dead at the hospital from the injuries he sustained in the accident.

According to police officers they are trying to figure out exactly what happened to cause the accident. At this time all they know is that one of the men ran the red light causing the collision. After the Burrtec truck collided with the Chevy, it ended up hitting the traffic light pole.

The San Bernardino County Public Works Department responded to the scene of the accident to secure the damaged traffic signal. They also aided in the cleanup of the fuel and oils that were spilled on the road as a result of the accident.

The police are still diligently working to investigate the cause of the accident.

Previous Mamlekat Joseph Pronounced Dead After Being Trapped Under Bus 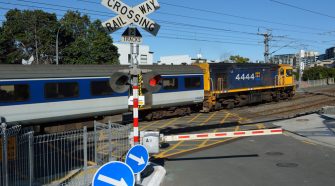