A Taft Man, Eulogio Torres, is facing several charges and will need a drunk driving attorney after his arrest following a two-car crash in South Taft, California. The collision occurred on Thursday, May 28, at about 5:30 pm at Wood and Lierly.

Torres, who is 21 years of age, faces several charges, including running a stop sign in a Chevrolet Cruze, crashing into a Ford Escape, and fleeing the scene of the accident.

Reports from the California Highway Patrol state that the suspect was traveling southbound on Lierly. At the same time, a woman driving a Ford Escape was eastbound on Wood Street.

Torres continued driving at a stop sign and crashed into the Ford vehicle, pushing it into the front of a house. The SUV finally lodged against a porch, with Torres’s Cruze nearby.

The woman, identified as Yvette Herrera, 21, was trapped in her vehicle after the crash. Firefighters cut through a felled tree, before using hydraulic tools to make space within the wreckage and pull her out.

Herrera was severely injured and also suffered fractures. Medics airlifted her to Kern Medical. Torres, however, didn’t sustain any injuries and fled from the crash scene. A Kern County Sheriff’s Deputy arrested him soon after at Tenth and Crystal, before handing him over to the CHP. Two male juveniles were also in Torres’ car and didn’t incur any injuries.

Officers also discovered that Torres ran a stop sign at Crystal and Lierly some seconds before running the stop sign at Wood and Lierly, causing the crash.

Authorities booked Torres on Felony DUI and felony hit-and-run causing injury. He is currently held at the Sheriff’s central receiving facility on $40,000 bail and will need a drunk driving attorney for his case. 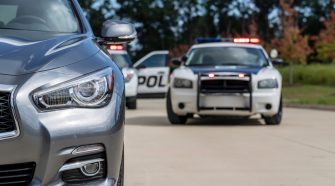