A four-year-old boy was fatally injured in a car accident in Irvine on Saturday.

The accident appears to have occurred when the boy was hit by a Honda CR-V while crossing the intersection of Lake Forest Drive and Romano on a scooter at approximately 5:15 p.m.

The boy, who has been identified as Zhiyu Guo, was taken to Hoag Hospital in Irvine and later transferred to the Children’s Hospital of Orange County, where he died at 9:20 p.m.

The driver, whose name has not been released, was traveling on Lake Forest Drive when the accident occurred. He stayed at the scene and cooperated with authorities, and even helped take the boy to the hospital.

The investigation into this incident remains ongoing, and police have not released any additional details about the nature of the accident. However, the intersection of Lake Forest Drive and Romano is located in between two gated communities, Laguna Altura and Hidden Canyon, and has not had a history of similar accidents. 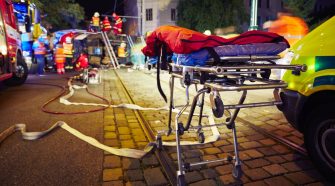