The man who crashed to his death last week while riding an allegedly stolen car along Highway 4 in Martinez, California, has been identified. The California Highway Patrol, in accident reports released on Wednesday, April 22, named the fatal victim as Jamal Capers, a 29-year-old man from Oakland.

The fatal occurrence took place on Friday, April 17, in the area of Franklin Canyon Road. Police said the incident was reported at about 1:35 pm, and officers responded shortly after.

Investigators determined that the fatal victim was driving the vehicle at speed above 100 mph, along the westbound lanes of the highway, east of the Franklin Canyon Road exit.

Upon approaching the exit ramp, the motorist, for reasons yet to be determined, lost control of his vehicle, causing the silver Volvo to sway into the center dirt median. The car then slammed into a guardrail, pushed back into the travel lanes in full force, and overturned violently.

Capers, who was not wearing a seat belt at the time of the crash, was expelled from the vehicle in the process through a closed sunroof. He was pronounced dead at the scene, from fatal injuries suffered.

Detectives discovered that the vehicle fit the description of one reported stolen that same day in the Martinez neighborhood. A registration check revealed it to be the same vehicle, according to the accident reports.

No other casualty was recorded in the fatal traffic wreck. 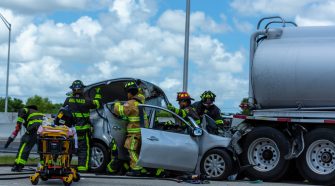