The identification of a man killed over the weekend between San Jacinto and Moreno Valley in Riverside County, California, calls for the involvement of auto accident attorneys. The California Highway Patrol, in a statement released on Tuesday, May 19, named the fatal victim as Nicholas Gonzalez, 28, of San Jacinto.

Patrol officers responded to the crash just after 10:45 p.m. on Sunday, May 17. Callers reported a fiery crash involving no fewer than three vehicles on Gilman Springs Road, just west of Bridge Street. Police said the initial crash resulted in several other wrecks on Gilman springs, as motorists swerved to avoid the crashed vehicles.

Preliminary investigations revealed one of the vehicles was a Chevrolet Silverado driven by the fatal victim westbound on Gilman Springs. For unknown reasons, Gonzalez drove his vehicle onto the opposing lanes. He then crossed the solid yellow lines and delineators to the left side of the road, where he veered into the path of an oncoming semi-truck and trailer. The two automobiles collided head-on.

Eyewitness accounts confirmed the Chevrolet pickup went ablaze and briefly became airborne. According to the reports, Gonzalez’s vehicle spiraled out of control and crashed into a third car near Bridge Street before coming to rest. Other approaching vehicles crashed into each other as they tried to avoid the dislodged vehicle parts and airborne debris scattered all over.

First responders pronounced Gonzalez deceased at the scene. The CHP did not report any other casualty.

The crash shut down all lanes on Gilman Springs for hours as investigators worked on the scene.

Employing the services of auto accident attorneys would ensure all involved parties get compensated for all financial, mechanical, and other damages incurred in the mishap.

Next William Dominguez Injured in Motorcycle Accident at Fuller Drive 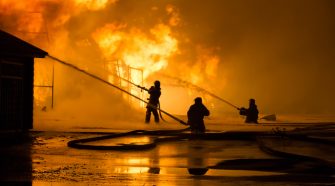