The driver who sustained injuries in a two-vehicle crash in Red Bluff, California, was identified on Wednesday, July 1st. The updated accident report revealed the victim’s name as Neil Moosaie, 32, of Brooklyn Park.

According to the California Highway Patrol, the crash occurred on Tuesday morning, June 30th. At approximately 6:30 a.m., officers responded to the crash site on Interstate 5, just south of Riverside Avenue. Their preliminary investigation revealed that Moosaie drove a 2020 Chevrolet Malibu southbound on the freeway.

For unknown reasons, the man rear-ended a 2005 Mazda 3 traveling on the same roadway. The impact caused the second vehicle to spin towards the center divider, strike a guardrail, and crash into the concrete bridge wall, shearing off the front half of the car.

The Malibu drifted into the center divider guardrail, and then across the freeway where it smashed into a concrete wall. Moosaie was not wearing a seatbelt; he suffered lacerations to his head, and the medics took him to St. Elizabeth Community Hospital for treatment.

The passenger in the Chevrolet identified as Patrick Napoleon, 33, of Minneapolis, did not sustain any injury. The driver of the Mazda, Daniel Brace Junior, 35, of San Diego, suffered lacerations to his legs and received treatment at St. Elizabeth Community Hospital.

The Mazda’s passenger, Chamise Mae Hurd, 39, of San Diego, had one of her legs severed, and the medics conveyed her to Mercy Medical Center in Redding for treatment. The investigation is still active. 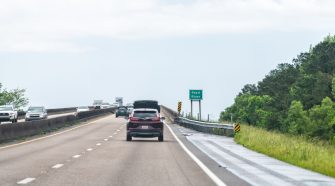 Nicholas A. Boyd, 4 Others Survive Multiple Collision on Edens Expressway with Injuries