A 65-year-old woman was trapped inside a Mazda Miata on Interstate 805 on Saturday, after being sideswiped by a truck.

The woman was a passenger in the Miata, which was being driven by a 51-year-old woman on northbound I-805 in the Sierra Mesa neighborhood of San Diego, just north of Interstate 8.

At around 11:00 a.m., the Miata was passing a white GMC 3-axle truck on the left when the truck experienced a flat tire. The truck swerved and hit the Miata, and also hit the center divider. There was debris that spilled over onto the southbound side of the highway, and a fuel spill which required the attention of a hazardous materials response team.

The 65-year-old woman was trapped in the Miata, and had to be rescued by authorities. She and the driver of the car were taken to a hospital with minor injuries, and are expected to recover. The status of the truck driver – a 34-year-old male – and his passenger, an 8-year-old boy, is unclear.

Following the crash, two lanes on the northbound side were closed for several hours. Alcohol and drugs are not believed to be a factor in the crash.

Next Van Falls off Overpass, 2 Dead 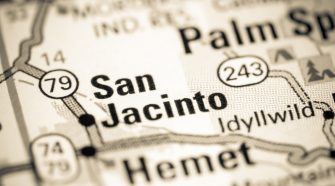