Chase Thompson, 12, is in Lurie Children’s Hospital with serious injuries after being struck by a hit and run driver in Deerfield, Illinois.

A westbound vehicle struck Thompson, who autistic and non-verbal, near the intersection of Deerfield Road and Beverly Place around 7:10p.m. on Friday, February 7. The driver fled the scene, continuing west on Deerfield. Bystanders found Thompson lying in the roadway, critically injured as a result of the impact, and unresponsive.

A responding ambulance then took the boy to Condell Medical Center. CMC later transferred him to Lurie Children’s Hospital.

Police are looking for a dark-colored 2013-2016 Ford Escape in connection with this incident. The vehicle may have an SEL or titanium trim. There may also be significant damage to the passenger side fender, grill and headlight.

Thad Thompson, Chase’s father, is offering a $10,000 reward for information that leads to the driver. Anyone is eligible to receive the reward – even the driver of the vehicle.

Because leaving the scene of an accident is a crime, if the driver comes forward, that person could use the reward money to cover legal fees.

If you have information about the hit and run that injured Chase Thompson, please call Deerfield police at 847-945-8636. 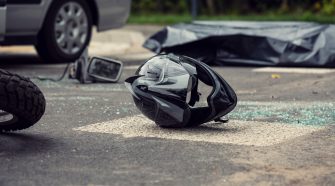