A 13-year-old teen lost his life after his bicycle ran into an accident with a vehicle. The tragic incident occurred on Thursday, July 16. The teen was identified as Sam D. Yousif, 13, of Niles.

According to the details shared by the authorities, the collision between Yousif’s bicycle and another vehicle happened in north suburban Niles. Yousif was riding his bicycle along the Cleveland Avenue and was just crossing the Waukegan Road. It was then that his bicycle came into the path of a 2014 Chevrolet Silverado. The Silverado was traveling northbound on the Waukegan Road.

Sam D. Yousif sustained critical injuries in the collision. He was rushed to the Lutheran General Hospital. However, he succumbed to his injuries and was pronounced dead.

The driver of the Silverado involved in the incident was not named by the authorities, although he was identified as an 18-year-old male. The driver remained on the scene of the accident following the crash. Preliminary investigations show that he showed no signs of drug or alcohol-induced intoxication.

The area has a history of bicycle incidents involving vehicles and bicyclists. Following many such incidents in the past, a number of signs have also been put up in the area to warn the motorists about being careful towards children, pedestrians and bicyclists. Because of this, the liability in this incident is not as clear-cut as it may appear.

The Niles police continue to investigate the incident. Once the investigations conclude, it will be known in the final accident reports whether or not any formal charges will be brought against the driver.

Next New Details of Perris Crash that Killed a Bicyclist, Steve Baxter, Released 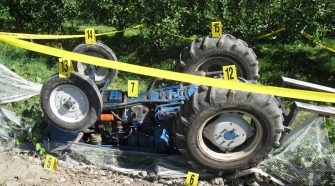