Suspected DUI driver, Lauren Prescia, 23, would need a drunk driving attorney’s service to answer for the charges against her. On Tuesday, July 14th, a court sitting in Las Vegas, Nevada, set her bail at $50 000.

The suspect is facing charges of driving under the influence of alcohol resulting in death, felony reckless driving, and abuse, neglect, or endangerment of a child. If Prescia makes bail, she will be subjected to electronic monitoring, alcohol monitoring, and would only be allowed to drive to work or a medical appointment.

According to the Metropolitan Police Department, the suspect was in a two-vehicle crash on Sunday night, July 12th, in west Las Vegas. A little after 7 p.m., she sped through North Rampart near West Lake Mead Boulevards in a Hyundai Sonata.

At the same time, a Nissan Sentra was making a turn from Lake Mead to Rampart. Prescia’s Hyundai struck the second car, causing it to go off the roadway. The suspect then lost control of her car, and continued northeast on Rampart, before going off the road and hitting a marquee sign.

The MPD said that the collision’s impact severed the right half of the vehicle, noting that the woman was traveling at 121 mph above the posted speed limit. The crash left Prescia and the driver of the Nissan with minor injuries, but her 1-year-old son, Royce Jones, who was in the car, passed away from injuries sustained.

Andrew Bennett, of the Nevada Office of Traffic Safety, said that the accident was preventable with a little accountability, responsibility, and respect for life. There is no additional information at this time. 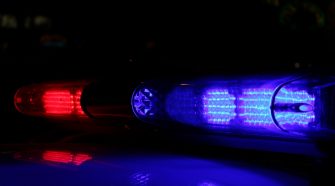