The motorcyclist who died in a fiery accident on Memorial Day has been identified as 70-year-old Peter George Vajtai of Henderson.

He was a doctor at Southern Hills Hospital and a gifted thoracic surgeon.

Vajtai was killed on Monday morning on South Durango Drive close to the I-215 Western Beltway bridge, according to Nevada accident reports.

Nevada Highway Patrol said he was riding a Trike Can-Am motorcycle and he ran a red light while turning on to Durango from Roy Horn Way.

As Vajtai went through the intersection, a Kia Sorento hit the left side of the motorcycle.

Vajtai was ejected from the Trike as it caught fire. He died at the scene.

NHP said the driver of the other vehicle did not require medical treatment.

Following the incident, NHP Trooper Travis Smaka addressed a news conference. He urged road users not to put their lives and other people’s lives at risk by rushing through intersections or driving at dangerous speeds.

The intersection was closed while NHP investigated the crash, accident reports stated.

NHP said it did not appear that speed or impairment factored into the crash. However, investigations are ongoing.

Twenty-four people died on Nevada’s roads in April, one more than the number of fatalities in April 2019 and almost twice the number of deaths recorded in March.

Spokesman for Nevada’s Office of Traffic Safety Andrew Bennett said the increase in deaths coincided with appeals for people to stay at home.

The families of some of the victims may have ground to file wrongful death lawsuits.

Next Update: James Taite Dies After Being Struck by Two Cars 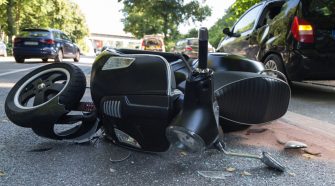