There are new accident reports on a fatal accident that occurred back in January.

The authorities in San Antonio have indicted a man who is accused of killing another motorist in a head-on crash.

Investigators said Jonathan Paul Jones was intoxicated and driving the wrong way when he crashed his pickup truck into a car driven by 23-year-old Taylor McCowan.

The accident happened on January 31 on the Chase Hill Boulevard exit of Loop 1604.

The young woman was heading home from Bible study when the crash occurred.

Jones, who was a deputy U.S. Marshal at the time, was charged with intoxication assault following the crash. He was 40 years old.

McCowan was pinned inside her car and she was later transported to University Hospital in serious condition. Her mother Raquel Hatch told the media she suffered brain damage and was on life support.

Jones was indicted this week on an upgraded charge of intoxication manslaughter.

Following the accident, he was relieved of operational duties and placed on administrative leave.

At that time, spokesman for the US Marshals Service Christopher Bozeman said the service would cooperate with the San Antonio Police Department.

According to official analysis of accident reports, ten people die on Texas roads every day. Some of those crashes are alcohol-related.

In Texas, intoxication manslaughter is a second-degree felony. It is punishable by up to 20 years in prison and a fine of up to $10,000. 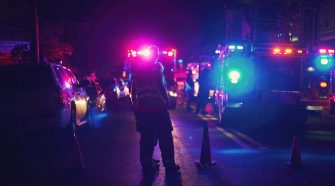