On Wednesday, September 30th, the Mesa Police Department arrested a man connected to a fatal hit-and-run accident in Mesa, Arizona. The investigators said that Frank Lawrence, 32, left the scene of the crash on January 11th.

The occurrence happened near Alma School Road and Southern Avenue. The accident victims told responding officers that they were traveling in a vehicle when the suspect began a road rage and then purposely ran one of them over.

The preliminary investigation uncovered that Lawrence was behind a white truck’s wheel when he drifted into the victim’s lane and drove erratically. The other vehicle’s female driver moved into a nearby apartment complex, where the man confronted her while she was still in the car.

The police said that 22-year-old James Ackerman Jr. left the vehicle to record the suspect’s license plate numbers. As the man ran into the roadway to get the license plate, Lawrence drove away but suddenly made a U-turn and struck him.

Medics transported Ackerman Jr. to the hospital, where he passed away from his injuries. Officers took the suspect into custody on a one-count charge of first-degree murder, aggravated assault, and leaving the scene of a deadly crash.

A hit-and-run accident under Arizona law gets charged either as a misdemeanor or a felony, depending on the facts of each case. Offenders who get convicted get either a probation, imprisonment between 1 days to 12 and a half years, and payment of fines. 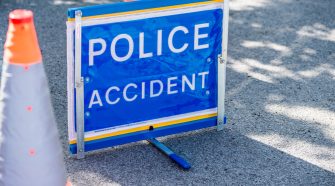