A Department of Corrections officer was left injured in a crash that occurred in Goodyear on Saturday, October 3. The officer was identified by the police as Savion Chavez.

According to the details shared by the authorities, the incident occurred around noon. Chavez was riding a motorcycle at the time. As he was driving through the intersection of the I-10 and Sarival Avenue, his vehicle came into a collision with an SUV. Chavez was riding his motorcycle to work when the crash happened.

The sheer impact of the collision caused Chavez to sustain critical injuries. Once first responders and paramedics reached the site of the accident, he was rushed to a hospital. He suffered internal bleeding and damage to lungs, broken legs as well as other injuries.

At this point, it isn’t clear exactly how the accident occurred. Police has not revealed the identification details of the other driver or the other vehicle involved. It is also not known whether the occupants of the SUV sustained any injuries in the incident.

Investigations into the incident are still ongoing. Once the investigations conclude, police may share a definite cause of the crash. In the meanwhile, the family of the officer Savion Chavez has set up a GoFundMe page for donations towards his treatment. The family also continues to update the page with information about the condition of the injured officer.

Many vital details surrounding the crash are still missing. Further accident reports from the authorities may shed light on precisely how this tragic crash occurred. 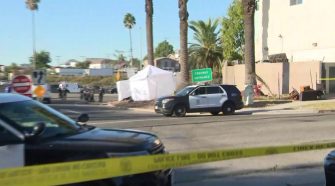