The drivers involved in the fatal crash of Cornville Road, Cornville, Arizona, that killed a 5-year-old girl have been identified. On Tuesday, March 10th, Yavapai County Sheriff’s Office spokeswoman, Dwight D’Evelyn, released their names as Jill Knox, 46, of Rimrock, and Chad Kime, 37, of Prescott.

The crash the two men were involved in occurred on Cornville Road, near Kimberly Road, on February 10th. The police report showed that Knox was driving a 2012 Chevy Suburban, with the deceased child, who is also his daughter, as his passenger.

The little girl was sitting in a “Regular” seat rather than a child safety seat. Knox, for unknown reasons, crossed the center line along Cornville Road and struck Kime’s pickup truck head-on.

The three people involved suffered severe injuries, and both drivers were taken to the Flagstaff Medical Center in critical condition. The little girl was taken to Valley Medical Center, where she was stabilized and then transferred to Phoenix Children’s Hospital.

The child had internal bleeding and was placed on life support. After three days of little or no progress, the little girl’s family asked the doctors to unplug her.

Knox and Kime are still alive at the time of this report, but the former has not been charged with a criminal offense. The man disclosed to the police when he was stable that he took pain meds and medicinal marijuana before getting behind the wheel of the vehicle.

The police found evidence of drug use, as well as a medical marijuana card. The case is still under investigation, and the police will provide updates on charges or the lack of it. 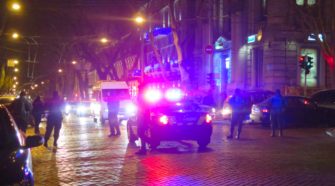