Mark Matthews, age 20, was killed last Thursday after an accident on Highway 99 near Rosedale Highway.

Matthews, a Bakersfield resident, was a passenger in a white Cadillac traveling southbound when it was hit by a semi truck at around 1:09 p.m. An autopsy revealed that he had died of “multiple blunt force traumatic injuries.”

The driver of the Cadillac, an unidentified 19-year-old male, was also hospitalized with injuries he had received in the crash. It is unknown whether the driver of the truck was injured.

Following the crash, two lanes of Highway 99 were blocked, and a large portion of the road was covered with oil which came from the Cadillac. Three lanes were closed until after 4 p.m.

The crash was ruled an accident, caused by speed and bad weather. 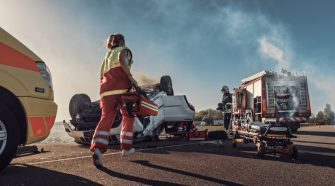