The Will County Coroner’s office has identified a 78-year-old Wilmington woman, Mary Lou Smolik, as the victim of a fatal crash in Lockport Township, Illinois. Accident reports state that the crash happened on Thursday, May 28.

According to the Coroner’s Office, Smolik was the passenger of the car that collided with another vehicle. The crash occurred at Executive Drive and Renwick Drive. The way and manner of the collision is under reconstruction by the Will County Sheriff’s office.

However, a report by the Crest Hill Police said that a Honda CR-V and a semi-truck were involved in the collision. Both vehicles were eastbound on Renwick Road at the time of the crash.

While traveling, the Honda tried to make a U-turn and hit the semi-truck. The impact of the collision caused the two occupants of the Honda to sustain serious injuries. Responding officers rushed them to Amita St. Joseph Medical Center for treatment.

Smolik died at the hospital at about 6:47 pm on Thursday. The driver of the semi-truck did not sustain any injuries. Police said that he consented to a blood test.

The Coroner’s office will determine the final cause of the victim’s death at a later date. They will do this when they receive police reports, toxicology reports, and medical reports of the victim.

Motorists must drive at a safe speed when they are on the roadway. Excessive speed causes drivers to lose control of their vehicles. They also fail to react early enough to sudden movements ahead of them.

According to accident reports, excess speed is a significant course of many road collisions that occur in the state of Illinois.

Next Matthew Mackenzie Identified as Man Killed in Somis Crash 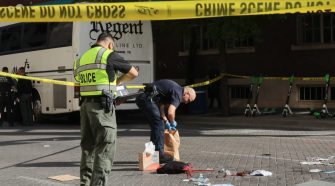