In a fatal crash that took place on the I-55 on Monday, March 2, an elderly man lost his life. The victim has been identified as Robin Francis, 82, of Fond Du Lac, Wisconsin.

According to the Illinois State Police, the accident was caused by the debris from a previous accident. A Porsche driving in the left lane came to a stop because a wheel from a previous accident was lying on the road. A Chevrolet traveling in the same lane failed to see the stopped Porsche. The driver of the Chevrolet was not able to reduce the speed in time. As a result, the car crashed into the Porsche and then collided with a tractor-trailer that was standing still on the shoulder.

The Porsche’s only occupant was its driver at the time of the collision. The Chevrolet’s second occupant, in addition to the driver, was Robin Francis. The drivers of both vehicles sustained injuries, although at this point the severity and extent of their injuries is not known. Francis was critically injured in the collision and was pronounced dead at the scene of the accident. The driver of the tractor-trailer also sustained injuries in the accident.

Authorities continue to investigate the incident. Investigations are being led by the ISP Traffic Crash Reconstruction Unit. Reports from the Unit will provide a clearer picture of how the accident happened and who was the negligent party. If the Chevrolet driver’s negligence, such as failure to reduce speed to avoid a collision, is demonstrated, ISP may bring charges against the driver. 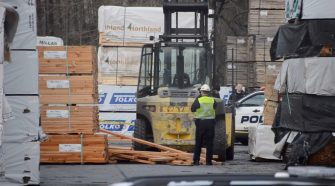