One person died from injuries suffered in a crash involving a pair of sport utility videos Saturday in Cheboygan, according to local public safety officials.

The director of the Cheboygan Department of Public Safety told local media outlets that Eathan Woodin, 24, of Cheboygan, was pronounced dead at an area hospital. Another person involved in the crash, a Cheboygan woman whose identity was not disclosed, also sustained injuries that aren’t considered life-threatening.

Authorities said the collision occurred at 2:24 p.m. Saturday on Main Street. Woodin reportedly was driving north on Main Street when he crossed a centerline and struck a southbound SUV head-on.

Woodin and the woman, who was driving the southbound SUV, were transported to area hospitals. Woodin later succumbed to his injuries, public safety officials said.

Multiple agencies, including the Inverness Fire Department, responded to the scene. The cause of the crash remains under investigation by the Cheboygan County Sheriff’s Department.

Woodin was an employee of Libby’s Café, a Cheboygan eatery. The business will host a fundraiser Thursday in Woodin’s memory to raise money to help his family cover expenses.

“Come in to enjoy a slice in memory of one of the kindest people we’ve had the honor to know and work with,” Libby’s Café officials wrote in a Facebook post. 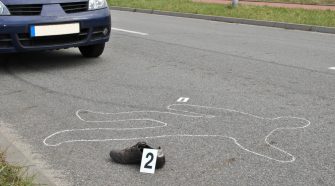