A driver who was suspected of being under the influence (though the influence of what was not released) was arrested as the lead suspect for at least three separate traffic accident-related injuries Friday morning, police say. Witnesses began reporting a black Dodge Durango that was being driven in a reckless fashion down the FasTrak lane of the Eastbound 91 at about 9:20 am, Friday morning.  The SUV was being driven by one Richard Hildreth, aged 33, reported CHP Officer Devon Boatman.

The driver first hit a Hyundai Elantra, driven by a fifty-seven-year-old woman, which spun out of control and onto the right shoulder. The driver of the SUV then continued onwards, driving against the median, sparks flying, and according to witnesses who phoned in the reckless driving hit at least fifteen divider poles between the FasTrak and regular traffic lanes.  The SUV eventually struck the center divider and went out of control across most of the traffic lanes before coming to a halt. A Nissan whose driver had been on the phone with police stopped behind the SUV, only to be struck by Toyota Tundra, which also hit several other vehicles.

At least three people were injured, two in potentially critical condition. The driver, who was not cooperative with police and would not exit the vehicle (despite the fact that it was on fire), was handcuffed to a back board and taken to UCI medical center. 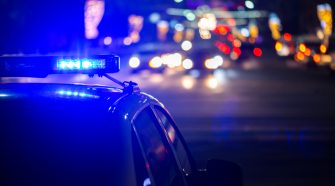