A man sustained injuries in a two-vehicle collision that occurred in the Clark County on Wednesday, September 23. The injured man was identified as Roy Snivley, 56, of Charleston.

As the tractor trailer approached the County Road 1700N, Shoaff slowed down to take a right turn. Snivley failed to notice in time that the truck had slowed down. He realized this only at the last moment and then swerved right to avoid a collision.

However, the Chevrolet truck still ended up colliding with the semi truck. Snivley then lost control of his vehicle. It veered across the road before colliding with an embankment. His vehicle rolled over the top of the embankment before coming to a stop.

Roy Snivley sustained non-critical injuries in the incident. Once the first responders arrived on the scene, he was transported to a local hospital. The driver of the other vehicle remained uninjured in the collision.

Preliminary investigations by ISP showed that Snivley’s negligence contributed to the crash. He was cited for failure to reduce speed to avoid an accident. Subsequent accident reports from ISP may shed more light on the incident. 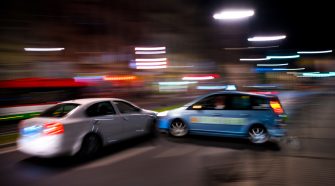