The Department of Public Safety (“DPS”) is investigating a crash that took place Sunday morning, causing six hit-and-run crashes along the way. The driver has been identified as James Ball.

Chandler Police reported a stabbing incident that led police on a high-speed pursuit on US-60 near Gilbert Road. According to police, Ball, 38, assaulted and later stabbed a woman on Sunday morning before leaving his home near the intersection of Ray Road and McClintock Drive.

Court records indicate that Ball committed four hit-and-run collisions in Chandler. In one of those collisions, it is reported that he allegedly struck a vehicle, backed up and hit it again. He is also believed to be involved in two more hit-and-run incidents in Mesa.

DPS reported that troopers attempted to stop Ball as he was traveling westbound on US-60, but he refused. Video footage of the incident was captured by Arizona Department of Transportation cameras.

In the video, the driver can be seen turning around, going the wrong way and nearly colliding with oncoming traffic. Ball then turns around again, this time traveling in the correct direction with traffic. DPS troopers were able to stop the driver a short time later when Ball’s vehicle crashed into a wall.

Ball’s family reported that a few weeks ago, he was committed for psychological evaluation but was released within a day. Ball is being held on $500,000 bond for aggravated assault, unlawful flight, six counts of hit-and-run, and reckless driving.

Chandler is 25 miles southeast of Phoenix. 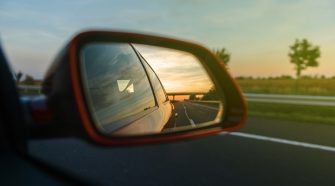