A motorcyclist from Camden County who was involved in a serious crash on Tuesday is making a public appeal.

Aaron Manuel, who has hired a car accident lawyer, wants the driver of a blue car who veered out in front of him to come forward, according to accident reports.

Manuel said he was on his way home in Kingsland when the driver forced him to swerve abruptly to save his life.

The aircraft mechanic said the incident was one of the scariest moments of his life.

Manuel said he was riding on Scrubby Bluff Road around 11 a.m. when a car that was parked in a grassy area appeared in front of him out of nowhere.

He said because of his evasive action, he was ejected from his motorcycle and he landed in a ditch on the other side of the road.

He ended up with a broken shoulder blade, nine broken ribs, and road rash.

Manuel was reportedly heading west when according to an eyewitness, the blue car cut him off, forcing him to brake and skid.

Manuel was transported to a Jacksonville hospital after a witness took his phone and called 911.

The driver did not stop at the scene.

Manuel was close to his home when the accident occurred, and he revealed that his surveillance cameras captured the car driving off.

He now wants either the driver of the vehicle or anyone who recognizes the car to come forward.

Manuel’s car accident lawyers told the media they are working to get the video enhanced so they can get a clearer image of the car’s license plate.

Further updates could be coming. 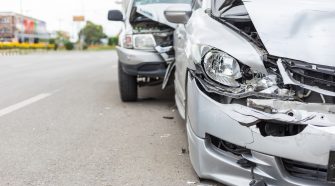